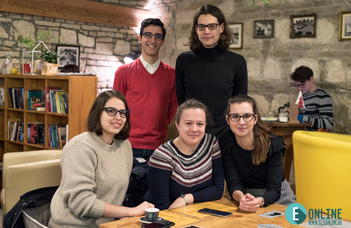 ELTE Law School’s team competed for the fifth time in a row this year at the Monroe E. Price Media Law Moot Court Competition, the most renowned moot court globally in media law, freedom of expression and on the right to privacy. Taking the sixth place in this year’s Virtual International Finals, the team became the second best in Europe – an achievement to be applauded.

As in previous years, ELTE’s team – having won the South-East Europe Regional Round in Budapest in December 2019 – qualified among the best 36 teams for the final round in Oxford.

The case of the competition concerned the conflict between A, B, and X as applicants and Surya, a fictional country as respondent. The questions revolved around the convictions of the applicants following a video broadcast depicting a masked individual who – using metaphorical language – urged his followers to convert the adherents of a minority religion to the faith of the majority. After the broadcast, some violent altercations occurred on the streets of the capital. Following the events, the state obtained the personal data of the masked man from the social media platform streaming the video without any judicial authorization. Consequently, the teams had to analyse the clash between freedom of religion and freedom of expression, as well as the case-law of various international human rights courts and national legislations. Moreover, the State’s conduct could have been also seen as problematic from a legislative and processual standpoint and thus questions of privacy and intermediary liability were also raised.

Due to the global COVID-19 pandemic, the University of Oxford was forced to entirely restructure and conduct the International Finals online. Consequently, the participating teams only had a few days at their hands to adopt to the changing circumstances and use the available tools of modern technology to present their arguments. These presentations were then marked along with the previously submitted written memorials.

ELTE took the commendable sixth place in the Virtual International Finals, becoming the second-best team in Europe. This result demonstrates the high level of the South-East Europe Round as well. Singapore Management University won the finals with University of Oxford taking the second place.

Members of the team in the academic year of 2019/2020 were Márton Angyal, Janka Bálint, Dorina Gyetván, Mirtill Hevesi-Tóth and Olivér Németh. They were coached by Dr. Gergely Gosztonyi with the help of the Ph.D.student co-coaches (Dr. Andrea Kovács, Dr. Attila Tatár and Dr. Anna Zanathy).

We congratulate the team members as well as their coaches for this exceptional achievement and thank our sponsors for their indispensable support.